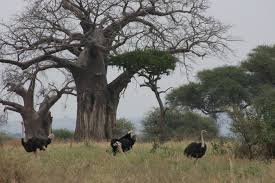 Written by admin on August 3, 2016. Posted in Tanzania National Parks

Tarangire is reached via the Great North Road, turning left through Makuyuni, and is some 112km (70 miles) south of Arusha. Accommodation with all facilities is at the Tarangire Lodge and Tented Camp

Home to more than 550 bird species, the park is a haven for bird enthusiasts.

The park is also famous for the  termite mounds that dot the landscape. Those that have been abandoned are often home to dwarf mongoose.

Back to Tanzania National Parks,