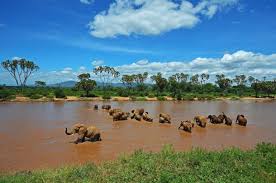 Written by admin on August 3, 2016. Posted in Kenya National Parks

What you will find on this Samburu National Reserve  page;

Samburu national game reserve is situated in the Northern Province of Kenya. It is rugged and a semi-arid. To get here you will cross the equator at Nanyuki and go northwards the passing the snow capped Mt Kenya lying a on the equator line and the environment here is enchanting. The river Uaso Nyiro (‘River of Brown Water’ in Samburu) is the lifeline and the nerve center of this Reserve and is bustling with a huge population of crocodiles.

This game reserve is renowned for its rare species of animals that can only be found in this park, like –the long necked gerenuk, gravy’s zebra, reticulated giraffe, and the Beisa onyx. The leopard is a frequent visitor in this park and most evenings it pays a courtesy call to the lodge’s guests as it feeds on some bite on a tree across the river. The park has an abundant species of birds and can turn even the most reluctant guest in to an avid bird watcher. It is considered by Ornithologists a paradise for bird viewing. In the evenings, you can watch gigantic crocodiles fight over big chunks of meat as they are fed by the lodge staff at the riverbanks or as they get out of the river to relax. This is a great photo session opportunity as you sip cocktails and watch the African sunset in orange flame sky.

Back to Kenya National Parks Some Samburu Safaris