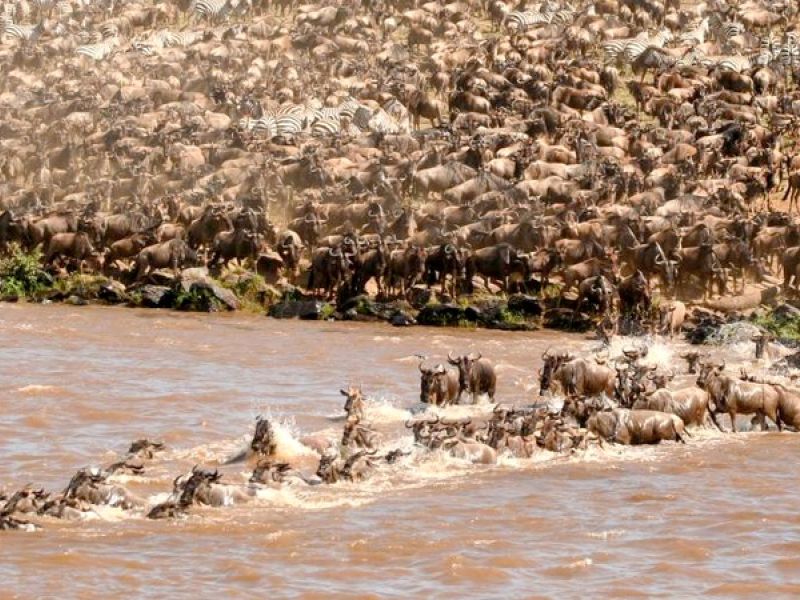 What you will find on this Masai Mara game reserve page;

Combine your safari with a balloon adventure over the Masai Mara, It will be an Experience never to be forgotten

Masai Mara is situated in south-west Kenya and is one of Africa’s Greatest Wildlife Reserves.

Together with the Serengeti National Park in Tanzania it forms Africa’s most diverse, incredible and most spectacular Eco-systems and possibly the world’s top safari big game viewing eco-system.

The Mara country is world famous for it’s vast assemblies of plains game together with their associated predators.

It is perhaps the only region left in Kenya where the visitor may see animals in the same super-abundance as existed a century ago.

Masai Mara remains the best wildlife destination and especially during the period of Wildebeasts migration.

This is a phenomenon that has given this national game reserve a world fame ;

Safari lovers congregate in this wildlife hotspot to witness the wildebeaste migration as they make circular mara river crossings.

Everything is big in Mara.

It is a country of breath-taking vistas, a panorama of vast rolling plains and rounded hills, of intermittent groves of acacia woodlands and dense thickets of scrub.

The whole is bisected by the Mara River and it’s tributaries which are margined by luxuriant riverine forest.

In every direction, there are the seemingly endless herds of game animals.

Mara posses the largest population of lions to be found in Kenya.

It also boasts large herds of Topi and a small population of Roan Antelope, animals not found in many other Kenya National Parks or Reserves .

Elephants are fairly common and the traveler may sometimes be held up by `elephants on the road’.

Among the great variety of large beasts are Buffalo, Black Rhino , and Hippopotamus.

The hippo-viewing platform on the Mara River near the Mara Serena Lodge is probably the best place in Kenya for seeing hippo.

The bird life of Mara is as profuse as it’s mammalian fauna.

The red-winged Schalow’s Turaco with it’s attenuated white-tipped crest is common along the numerous wooded watercourses,

In the more extensive riverine forest there is also Ross’ Turaco.

The Mara River is also the home of the great orange-buff Pel’s Fishing Owl and of flocks of wary Crested Guinea-fowl.

NOTE:  The Maasai Mara is an all year round destination with the big cats, and all the big game still in the Maasai Mara Ecosystem.