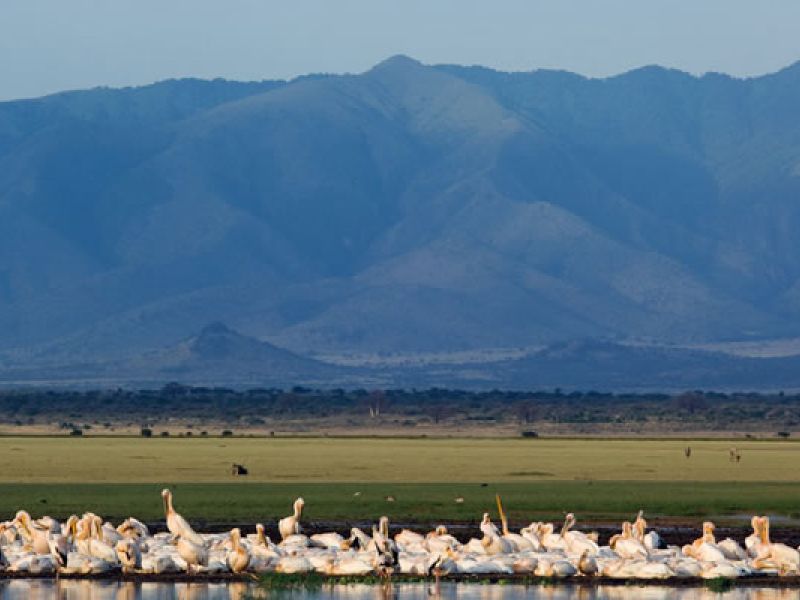 Although Lake Manyara National Park covers an area of only 318sq km (123sq miles), its terrain is so diverse that its mammal and bird lists are most impressive. The Park includes the northern and most of the western parts of the lake and its shores with a westward expansion to the top of the Rift Valley wall where Lake Manyara Lodge is sited. Large areas of ground-water forest with giant fig and mahogany trees alternate with acacia woodland and more open places, all well watered. A network of roads and tracks gives the visitor maximum game and bird viewing opportunities. The tree-climbing Lions of Manyara-like the tree-climbing Lions of Ishasha in the Ruwenzori National Park, Uganda-are famous for this feature of lion behavior, which may also be observed in Ngorongoro and Serengeti. In Manyara it is probably due to a combination of the need to avoid dense undergrowth and a search for cool shade. Probably the lions have also found that in an arboreal resting place the torment of biting flies is less.

In the Ruwenzori National Park a different explanation must be sought: there the lions apparently climb trees as vantage points in order to see over the tall grass.

Numbers of Elephant are resident in the Park. Buffalo are common and herds of 300-400 have been recorded. Black Rhinoceros are very uncommon. Leopards occur in most places and it is not unusual to come across them in the early morning or late evening: like the lions, they may be seen resting in trees.

Manyara is noted for its wealth of birdlife. At times the lake is visited by many thousands of Lesser Flamingos, together with a sprinkling of the larger species. Maccoa Ducks and White-backed Ducks are resident, and the beautiful little Pygmy Goose is sometimes observed. The Chestnut-banded Sand Plover, a bird with a very restricted distribution in East Africa, is found on mudflats and sandy areas. Over 30 different birds of prey have been recorded in the Park, including the Palm-nut Vulture and Ayres’ and Crowned Hawk Eagles.

Lake Manyara National Park is 107km (67 miles) south-west of Arusha via the Great North Road; at Nakuyuni a right turn leads after 40km (25 miles) to the village of Mto-wa-Mbu: the Park entrance is a little over a mile past the village. Accommodation is available at the Lake Manyara Hotel, sited on the top of the Rift Wall with spectacular views over the lake. Official camping sites are available near the Park boundary.

Contact us for further information regarding this national park