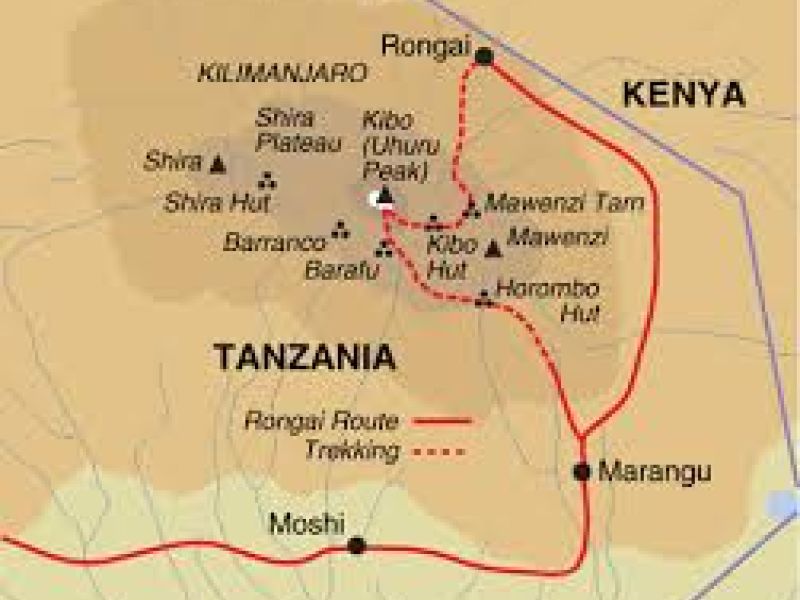 Kilimanjaro National Park covers an area of 1,864sq km (720sq miles) of Africa’s highest mountain, extending from m1,824m (6,000ft) to the summit at 5,895m (19,340ft). At lower altitudes the Park consists of mountain rain forest, giving way to scrub-there is no bamboo zone on Kilimanjaro-then alpine moorland and finally ice-fields.

At 5,895 m, Kilimanjaro is the highest point in Africa. This volcanic massif stands in splendid isolation above the surrounding plains, with its snowy peak looming over the Savannah. The mountain is encircled by mountain forest. Numerous mammals, many of them endangered species, live in the park.

Easiest access to the mountain is from Marangu on the southern slopes, whence the Marangu mountain track, passable for four-wheel-drive vehicles, leads through Kilimanjaro national park to the upper edge of the forest at 3,895m (9,500ft). There are huts on the mountain for mountain climbers and hotels at Marangu.

The most interesting mammal in the mountain forest is Abbot’s Duiker, an extremely local and uncommon antelope restricted to a few mountain forests in northern Tanzania. In addition Elephant, Buffalo, Black Rhinoceros, Eland, Leopard, Black and White Colobus and Blue Monkey occur in the Park.

With such a diversity of habitats, Bird life International records 671 avian species in the area, including 13 classified at risk of extinction. Kilimanjaro national park is a superlative destination for an East Africa birding trip especially during the wet season. Montane forest gives way to alpine meadows until at 4000 meters, the landscape changes to weird, towering stems of giant lobelias in a sea of soft heather.

Of special note among Kilimanjaro birds in the alpine zone are Lammergeyer, Mountain Chat and Scarlet-tufted Malachite Sunbird.

Other National Parks and Game Reserves in Tanzania

You can visit our reviews profile to see what our past clients say about trips to Mount Kilimanjaro national park.